I have decided to move the blog to a private domain. The new blog address is criticalsoftwareblog.com
Posted by Yacoub Massad at 3:52 PM No comments:

Object Composability: Another reason why the Service Locator is an anti-pattern

The Service Locator pattern (or anti-pattern) is considered to be one way to implement the Inversion of Control (IoC) principle. When this pattern is used, a class can find or locate some dependency by asking some entity (called the Service Locator) to provide such dependency. Here is an example:

Here we have a service contract called IEmailSender that allows for sending email messages. The OrderProcessor class depends on this service. To obtain such service, it invokes a static class, i.e., the ServiceLocator class, to locate the IEmailSender Service. It uses such service to send some email to the customer.

For this to work, the developer would have registered some implementation of IEmailSender with the Service Locator, probably at application startup.

In his blog, Mark Seemann has published two articles to provide reasons why the Service Locator pattern is actually an anti-pattern.

The first article speaks about the fact that this pattern creates hidden dependencies. In our example, it is not very clear from the constructor of OrderProcessor that it has a dependency on IEmailSender.

The second article speaks about the fact that the Service Locator entity provides its consumers access to more services than they need and thus it violates the Interface Segregation Principle. In our example, the OrderProcessor class can use the ServiceLocator to locate some IOtherService service that it does not need.

In this article, I provide another important reason why the Service Locator is an anti-pattern.

The Service Locator is an anti-pattern because it limits Object Composability.

Object Composability is a design principle that drives us to design classes in a such a way that they can be composed in different ways to satisfy current and new requirements.

Consider the previous example of OrderProcessor, but this time I will be using the Dependency Injection pattern instead of the Service Locator pattern. Here is how it would look like:

The OrderProcessor class does not know which implementation of IEmailSender it will be using. However, this can also be achieved using the Service Locator.

What is different in this case, is that each OrderProcessor instance can be depending on a different implementation of IEmailSender or even an object graph that is composed in a totally different way.

Consider the case where we want to encrypt email messages. We can use the Decorator Pattern to create a decorator that encrypts the body of the message before sending it. Here is an example:

Please ignore the fact the email encryption does not work this way. I am just using this as an example.

Using the Service Locator, we can register this EmailSenderEncryptionDecorator service with the service locator and the job is done. Right? What's the problem then?

Using dependency injection, we can easily do this. Actually, we can compose objects in any way that we want.

Here we have very flexible Object Composability, i.e., we can compose the objects in any way that we like.

How can we use the Service Locator pattern to make one instance of OrderProcessor use EmailSenderEncryptionDecorator as its dependency, and another one to use SmtpEmailSender? I cannot think of any clean solution for this.

Please note that I gave a simple example. In real applications, we have more complex examples of object composition. We might have multiple decorators for a single interface, and for different consumers (who might be of the same type) we would need to inject a dependency that is composed in a totally different manner.

Please note also that using names to locate different implementations of the dependency based on names (as a differentiating parameter) does not solve the issue. How can two instances of OrderProcessor (for example) use two different names to locate different implementations of the IEmailSender service? Should we use Dependency Injection to inject the service name? How can a name be enough to present the many different ways a service can be composed? Wouldn't this violate the IoC principle by having the client know much about its dependency?

Object Oriented design principles drive us in the direction of creating classes that have high composability. This gives us the power to reuse classes by composing them differently.

Using the Service Locator to achieve IoC will limit composability.

With the Service Locator, our options of specifying the dependency to use are much more limited than in the case of Dependency Injection.
Posted by Yacoub Massad at 5:23 PM 1 comment:

In object oriented programming, SOLID is a set of principles that allows us to create flexible software that is easy to maintain and extend in the future. If we use such principles, we end up with a lot of small classes in our code base. Each of these classes will have only a single responsibility, but can collaborate with other classes.

We use Dependency Injection to create loosely coupled classes. Classes do not depend on other classes directly, instead they depend on abstractions. A class declares that it depends on specific abstractions, and a third party will inject concrete implementations of such abstractions when an object of such class is created.
This third party is usually some code that lives in the application entry point and is called the composition root. This code will create a graph of objects that formulate the application.

Two ways of creating such object graph are:

In this article I talk about a problem of using DI Containers and show how using Pure DI might be a better solution.
Let’s start by an example of creating an object graph using a DI container. Consider the following UML class diagram:

The OrderProcessor class constructor requires an IEmailSender and an ICurrencyConverter.
We can use a DI container to map each interface with the corresponding class that implements it. After such mapping, we can use the container to create as many objects as we want. The following code demonstrates this using Unity DI Container (which is a DI container created by Microsoft):

Here we map each interface to the class that implements it. After doing that we ask the container to build us an order processor. We provide any required settings such as the currency conversion web service URL and the email server address. Other than that, the container knows how to construct the object graph using something called auto-wiring.

Here comes the benefit of using the DI container: Imagine that you have a bigger object graph. Let’s say that other than the email sender service and the currency conversion service, you have an order storage service (or an order repository), a SMS sending service, a credit card processing service, an order queuing service, a customer loyalty management service, a logging service, security related services and many other services. Imagine that there are 20 such services and some of them depend on each other. And let’s say that you have some 20 application-level classes (like ASP.Net controllers) that depend on these services to work. Constructing such classes manually requires a lot of code and thus costs more to maintain.

For the sake of the discussion I will define the following:

1)      Simple object graph: an object graph of any size and any depth that has the following two attributes:

a. For any interface (or abstraction) at most one class that impalements such interface is used in the object graph.

b. For any class, at most one instance is used in the object graph (or multiple instances with the exact same construction parameter arguments). This single instance can be used multiple times in the graph.

Please note that I am using the terms “simple” and “complex” here with a special meaning. I chose these terms because I could not come up with better ones. In different contexts, “complex object graph” means something else.

Please note that here we can have a rough measure of complexity depending on how many objects violate the two previous rules. Some graphs are more complex than others.

Here are some reasons why we can have a complex object graph:

1) We sometimes use the Decorator pattern to add functionality to some object. For example, we might create a decorator for the IEmailSender class to encrypt the email message before we send it.

Here is how this part of the object graph would look like: 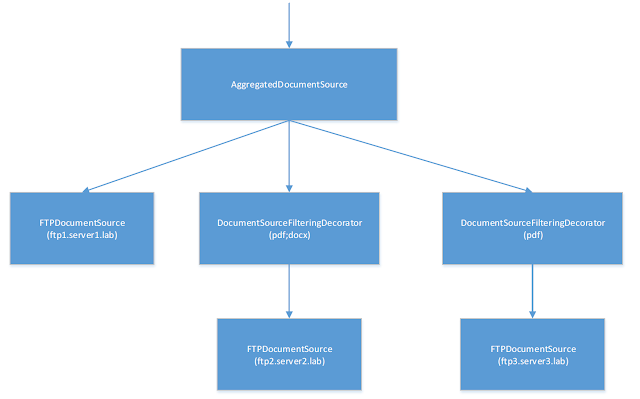 Here is a UML class diagram for the involved types:

Here is how such object graph is configured and created using Unity DI container:

You can see from this example how complex it has become to create the object graph using a DI container.
Since we have multiple registrations for the same interface, we use names to distinguish between different registrations.
In the above code, we loop through the list of ftp servers that we got from the configuration database or file, and for each one of them we decide whether we want to have a filtering decorator or not based on the corresponding filter.

Notice how we use the index “i” to create unique names.
In the end, we need to register the AggregatedDocumentSource. Such class accepts an array of IDocuemntSource objects in its constructor. We use the names we collected in the loop to point this registration to the document sources it needs to link to.

As you can see, we no longer use the auto-wiring feature. It’s like we are manually constructing the graph, but with more verbosity.
Now, let’s take a look on how we can use pure DI to construct such object graph.

Here, it is very clear that using pure DI in this case produces much more readable and maintainable code.

When we start having complex graphs, we lose the ability to auto-wire the graph using the auto-wiring feature provided by DI containers. Most of the registrations will have names (or other DI container features with similar consequences), and we would be manually-wiring the objects ourselves, but with more code and less compile-time validation support than pure DI.

Named registration isn’t required just for the types that violate the simple graph attributes. Once you start having such named registrations, some objects that depend on types that were registered with names will also require names for registration, take a look at this example:

Here we have a DocumentsProcessor class that takes in an IDocumentSource in its constructor, and will process documents from the source when we call its Process method.
Let’s say that we want to create a DocumentProcessor for each document source, i.e., we want to have the following graph (all 3 DocumentProcessor objects will be used in a single graph): 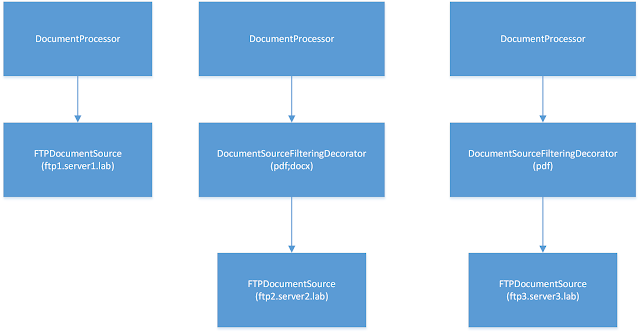 Summary:
For simple object graphs, DI containers can be a good choice. Although in my experience, graphs tend to become complex very fast in a project lifetime. If you use DI containers, once the graph becomes complex you would either have to switch to pure DI or live with a lot of named registrations.
For complex graphs, pure DI is much better.